To allow for the need for increasing flexibility in Attendance Roll Marking PCSchool has made some changes to the Timetable Period Descriptions in Version 2016. Changes will allow schools to create periods for each day in the timetable where the number of periods in the day or length / duration of the period differs. To allow for this the ‘Code’ for each period has changed in format (is not system generated) and a Time Period column has been added.

Changes should not affect most schools, however if schools have previously assigned Year Level Restrictions to periods these may need to be revisited and updated to allow for the new logic as outlined below.

Example of how periods may be set up in Version 2015:

Example of how periods need to be set up in Version 2016:

Example of how periods can be set up in the near future:

PCSchool Spider Absence Entry view, if ‘Build from Timetable’ is unticked, will only allow teachers to mark the roll for AM or PM attendance periods when the ‘Form Subject’ is selected.

For other subjects (assigned to the student in Student Subject Information) teachers can mark the roll for numbered periods (Pd 1 to 12).

Find Teachers and Subjects by Typing a couple of letters

22/1/2012   PCSchool Student Management Software has recently add functionality to the Time Table Module. The enhancements include: 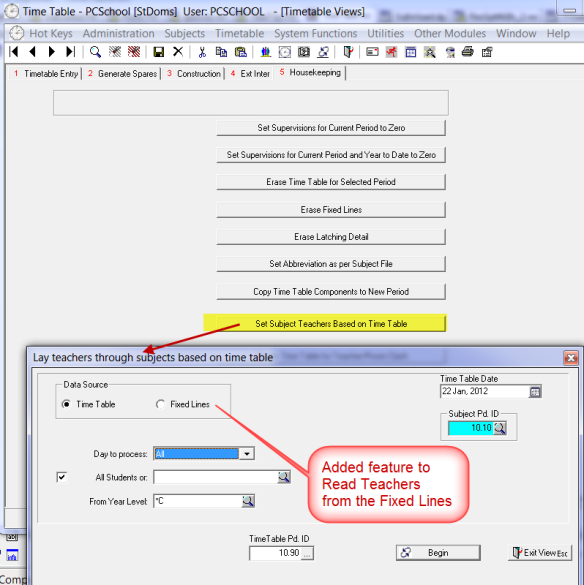 Allocating Teachers based on Fixed Lines

Filter Time Table Display based on Teachers, Subject and/or Room